Our Blogs > An Analysis Of Instagram Data For All-Americans

Women’s basketball starters whose teams competed in the second weekend of this year’s NCAA tournament have an average of nearly twice as many Instagram followers as their male counterparts, with nine of the 11 starters in the Sweet 16 with the largest Instagram followings being women. If allowed to monetize their names, images and likenesses (NILs), those athletes could capitalize upon annual earning potentials of at least $50,000, if not potential revenue that would be in the mid-to-high six figures for the most marketable college athletes.

This week’s newsletter takes another original deep dive into how the social media followings and engagement rates of some of the top performers in college athletics compare across numerous sports by analyzing the Instagram profiles of athletes who were named to the most recent All-America teams in 14 sports. The Instagram follower and engagement rate data is current as of this week, with the data for men’s and women’s basketball All-Americans being current as of the morning of April 1.

While this analysis doesn’t include every athlete in every sport, or even every All-American, it examines the Instagram followings of many of the highest-performing college athletes and measures them against their peers in other sports.

Being an All-American, or even a starter, isn’t a requirement for a college athlete to build a significant social media following but this study is intended to analyze the Instagram profiles of the athletes who are the very best in their respective sports, and as a result, help identify who could have the greatest earning potential.

First, here are some of the main takeaways:

For private accounts, follower counts were included in the analysis but engagement rates were not. 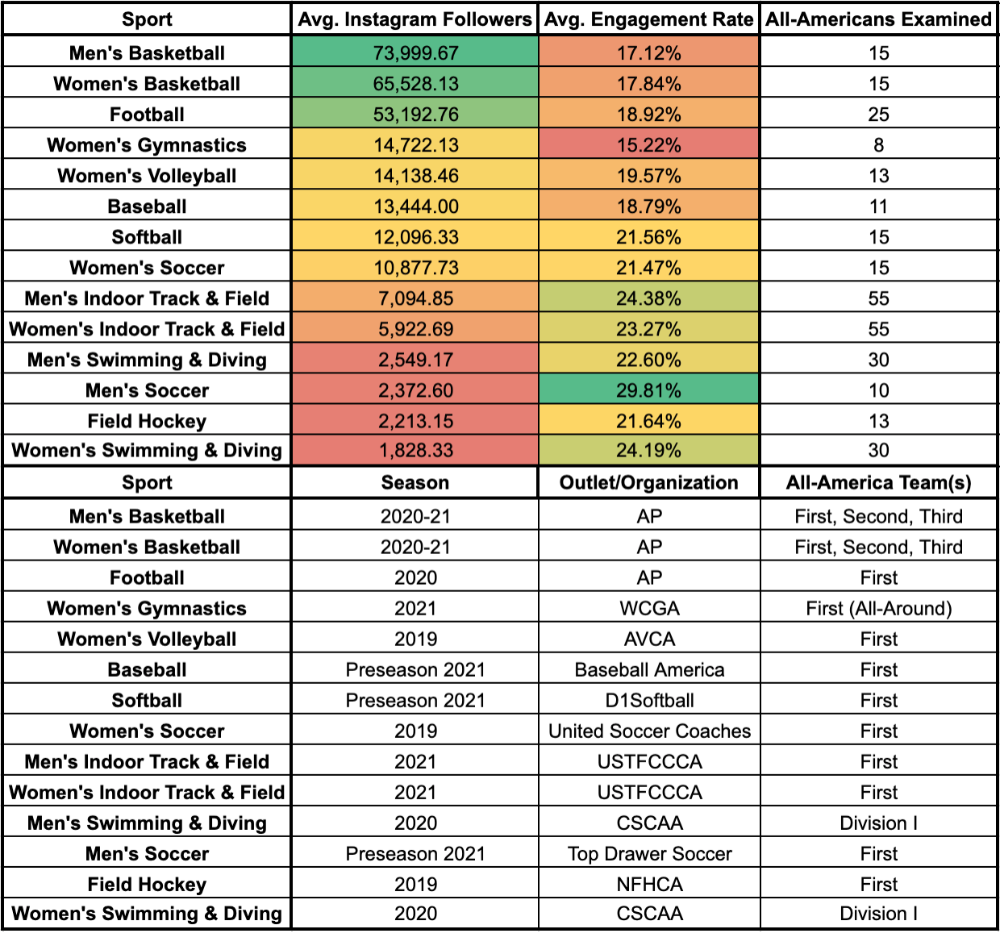 Among the college athletes examined, who were enrolled in school this academic year and who were named to an All-America team, as defined above, here are the 39 athletes who have at least 20,000 Instagram followers, showing the diversity of sports among All-Americans with the largest social media followings. Once again, not every swimming and diving, or track and field All-American was analyzed.

“Sports that you may not traditionally or typically associate with having the same sort of commercial reach or pedigree as football or basketball actually could turn out to be very, very successful in whatever the new landscape ultimately looks like,” said Darryl Seibel, a founding partner of Stadion Sports, which provides advice and an education-based approach to NIL for its clients and partners. “The fan following is significant, it’s informed, it’s engaged and that represents real opportunities, so again, sports that you might not automatically or immediately associate with strong NIL opportunities could in fact do very, very well.”

Below is a scatter plot with the same data that’s in the table above, showing how All-Americans who compete in Olympic or “non-revenue” sports – and especially women – often have some of the highest average engagement rates of All-Americans in any sport. Boling, the track and field sensation who was featured on ESPN programming as a high schooler, is a great example of the type of Olympic-sport athlete who could stand to benefit more than most athletes from NIL legislation, similar to Tuohy (more on her in a second) and Holman (grab some popcorn and watch the video below). Boling, who earned a national-best three first-team All-America indoor track and field honors from the USTFCCCA in March, has an Instagram following and engagement numbers that are similar to those of Oklahoma State’s Cade Cunningham, who’s projected to be drafted No. 1 overall in the 2021 NBA Draft.

On the other end of the spectrum, athletes with smaller, but more engaged social media followings could potentially provide value for localized or hyper-targeted marketing campaigns if an athlete’s followers are more likely to engage with his or her posts, based on the sport or the school, or the athlete’s personality or outside pursuits.

“You’re going to find opportunities in sports that are a reflection of just how engaged and active fans of those sports are,” Seibel said. “Some sports have just a significantly active fan base.”

Below is a scatter plot of the athletes examined who have fewer than 20,000 Instagram followers. Many of the athletes have engagement rates above 25 percent, which means that an athlete receives at least one like or comment for every four followers he or she has on Instagram, which could be an appealing market for sponsored social media posts that pertain to niche brands or products. 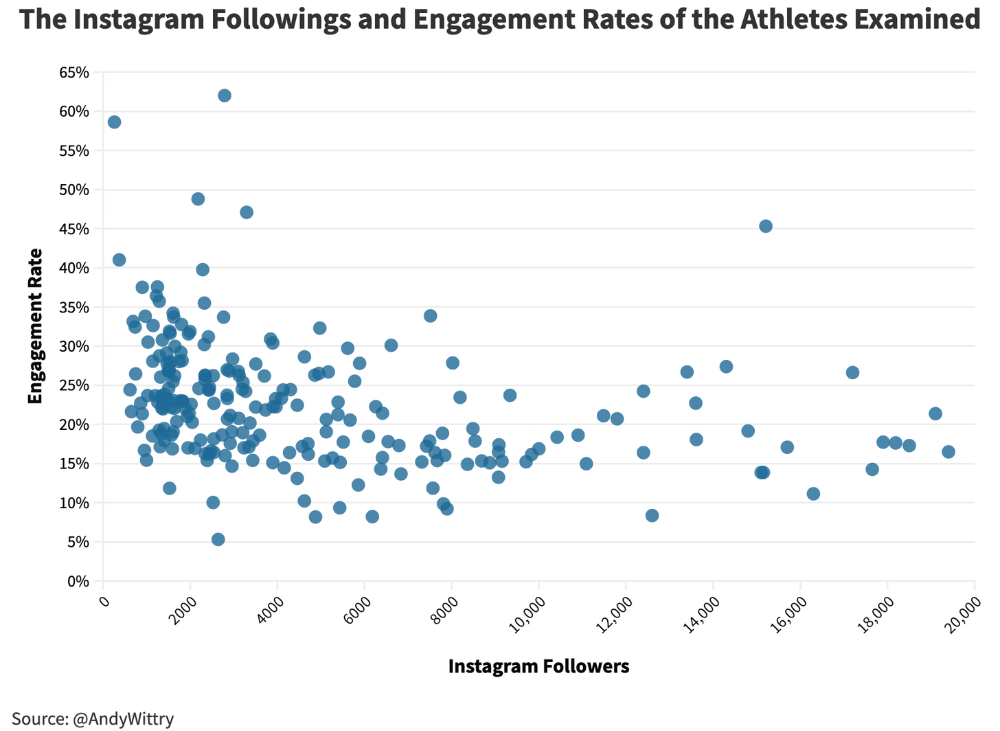 Among the several hundred current, reigning and preseason All-Americans who were examined, there are 21 who enrolled in school this academic year who have at least 50,000 Instagram followers. The two outliers in terms of followers and engagement rate are women who are freshmen in college – Bueckers, who was recently named the AP Women’s Player of the Year, and Tuohy, NC State’s standout distance runner who set the U.S. girls high school 5K record with a time of 16:06. 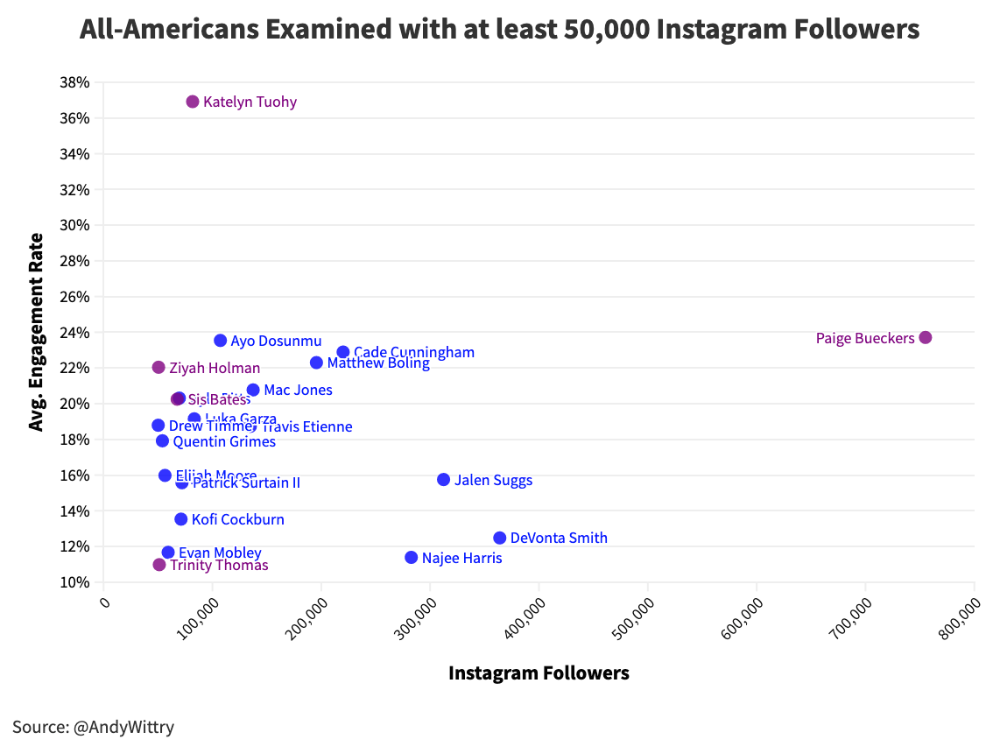 “One misperception,” Seibel said, “is that the most-visible sports are the ones that will benefit most from this. I don’t think that’s necessarily the case and it comes down to the fan following for some sports is so active and the level of engagement is so great that there is untapped value there.”

While football is the most popular American sport – and specifically the NFL, in terms of the most popular professional sports league in the country – when NIL legislation goes into effect, athletes who compete in other sports will also command significant earning potential, especially if they claim a large market share of a sport, a fan base or a market that has a more engaged and potentially untapped audience.